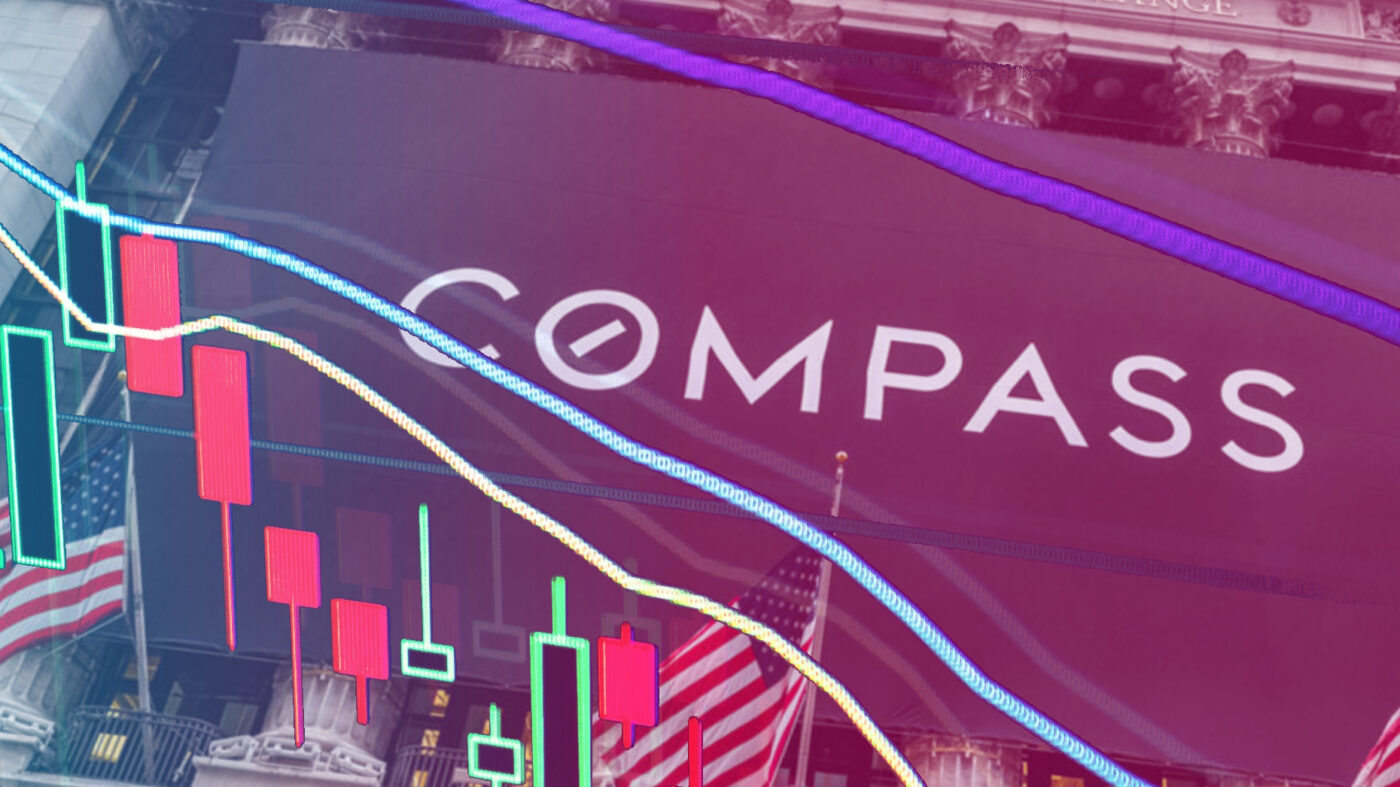 The company’s shares ended Monday trading at $10.74, down significantly compared to when they debuted about six months ago. The drop reduced Compass’ valuation to $4.2 billion.

Shares of fast-growing brokerage Compass tumbled Monday, bringing the company’s valuation to a new low just six months after it debuted on the stock market.

The company’s shares began trading Monday for $11.33, but dropped minutes later to less than $11. They hit a low point Monday of $10.72, before rebounding ever so slightly to finish the day at $10.74. The price represents a significant drop compared to the more than $20 that shares fetched on the day Compass went public in April.

The falling share prices have reduced Compass’ market cap, or the value of the company, to $4.2 billion. Shortly before Compass went public, it was valued at over $7 billion, and that was down from a prior valuation of more than $10 billion.

The drop has not gone unnoticed by industry watchers. Last week, analyst Mike DelPrete observed that Compass’ is now worth the same amount that it was in 2018. At the time, the company had $900 million in revenue, 35,000 transactions and 8,000 agents. Today, DelPrete continued, it has 22,000 agents, did 145,000 transactions in fiscal year 2020, and pulled in $5.5 billion in revenue over the last 12 months.

“For those keeping track, no, company valuations aren’t necessarily rational,” DelPrete concluded. He went on to say “it seems that investors either significantly overvalued the company in its previous fundraising rounds or are pessimistic about its growth prospects going forward (or a combination of the two).”

Still, not every real estate company has had such a rough ride in the stock market this year. Realogy, for example, saw its stock price drop Monday from just over $19 per share to just under $18.90. But compared to six months ago, Realogy’s price is actually up from just over $15.30 per share.

In his note, DelPrete called attention to Realogy’s performance, which in total is up 36 percent year-to-date, compared to Compass which is down 45 percent over that same period. In an email to Inman, DelPrete ultimately called the market “the great equalizer.”

Beyond Realogy, shares in eXp World Holdings — parent of eXp Realty — were actually up several cents Monday, finishing the day at $41.65. The company’s stock price is also up slightly compared to six months ago.

On the other hand, Compass isn’t alone among real estate companies who have seen disappointing stock market performances over the last six months. Redfin, RE/MAX and Zillow are all down over that period. In Zillow’s case, shares have seen an especially precipitous fall from more than $200 in February to less than $90 today.

In many ways, this is a continuation of a story that began in the spring, when the housing market caught fire but stocks in most real estate companies began experiencing a downward trend. A few firms — Realogy and eXp among them — managed to pull out of that trend, but for many publicly traded real estate companies it has continued.

Compass fits firmly in this trend and may also be experiencing some of the growing pains of a newly public company; as is typical after an initial public offering, employees and other early shareholders were prohibited from selling shares for the first six months. That period just ended weeks ago, meaning Compass agents — who receive stock as part of their compensation — can now sell their shares. A tsunami of such sales could flood the market and drive down prices.

On Monday the Real Deal — which first reported Compass’ falling stock price this week — also noted that analysts have seen the trading volume of Compass shares spike lately, indicating someone may be trying to offload a large number of the shares.

Beyond Compass’ specific struggles, publicly traded housing companies may be running into investors’ concerns about issues such as inflation, housing inventory, rising mortgage rates, and pull back from the Fed’s involvement in the mortgage market.